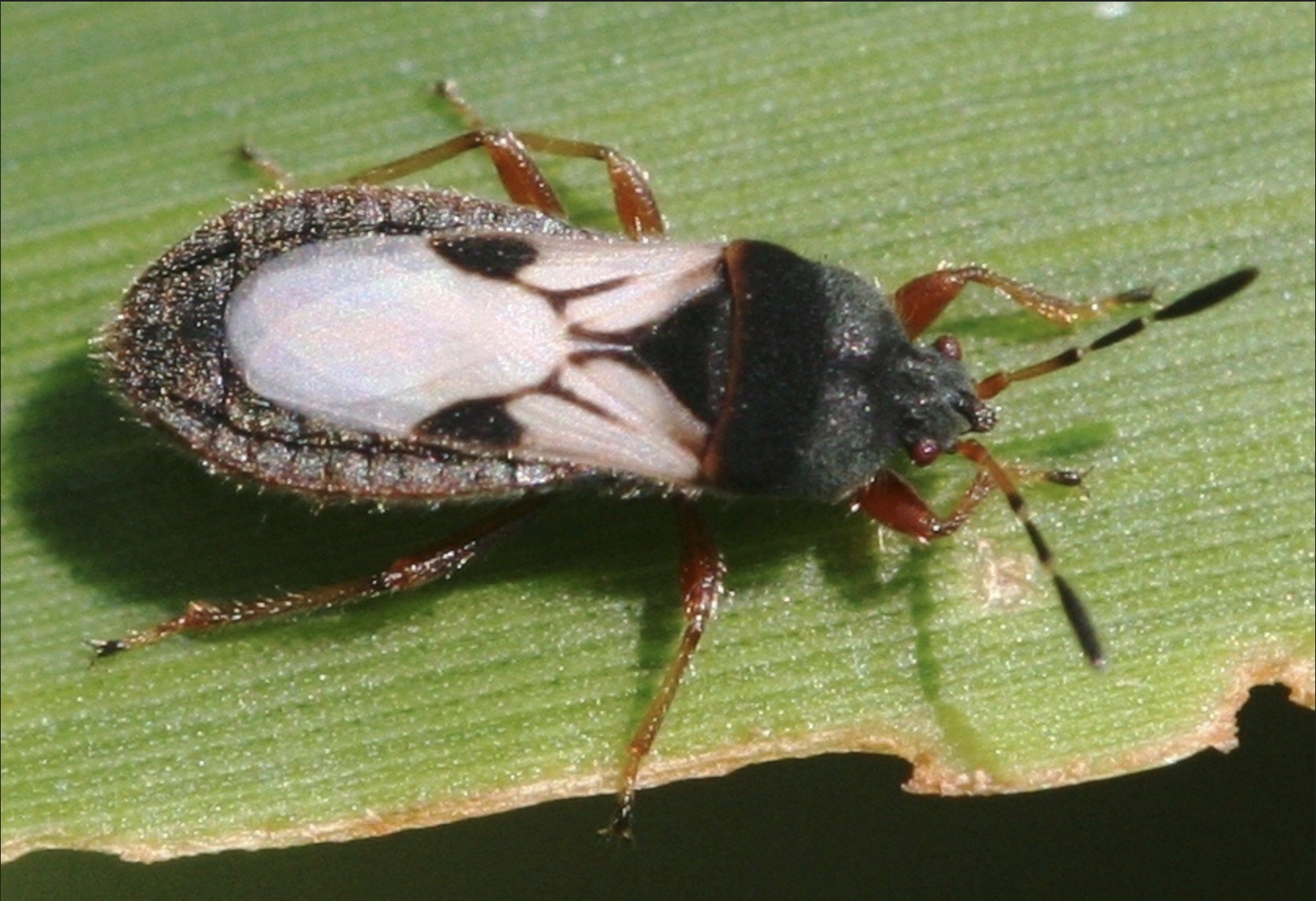 You’ve been watering and watering and watering and the lawn is still dying. Small dead brown patches keep getting bigger. The lawn is dying from the edges of the lawn also.  You have watered so much that now you have algae growing in the turf, mushrooms are now growing and more of the lawn has died. You have now created another problem, a Fungus. We will discuss the Fungus in another issue, so for now let’s discuss the first problem, the Southern Chinch Bug (B. insularis). This pest primarily feeds on St. Augustinegrass but also feeds on Bermuda and zoysiagrass. You can spot a chinch bug problem from a distance. It is first sign is a “Rusty red tint” in color, which as they feed and move on, they leave grass that will turn brown in color, the dead look. You’ll find them at the edges of the Rusty red areas working the lower area of the grass nodes just above the root system.

Adult chinch bugs overwinter in dry grass and other debris that offers them protection. In spring or early summer, depending on temperature and moisture, overwintering females lay 200 to 300 eggs on leaves of grass, or push them into soft soil and other protected places. Young nymphs (the immature stages) emerging from the eggs are bright red with a distant white band across the back. The red changes to orange, orange-brown then black as the nymph goes through five growth stages, or instars. The nymphs mature into adults, which are black with a white spot on the back between their wings. The adult stage of the chinch bug can live 70 days or more. Development of one generation, from egg to adult can take six weeks. They can produce up to seven generations per year in south Florida but only four generations in the cooler areas like north Florida.

Chinch Bugs suck the juices from grass leaves through their needle-like beaks. They also inject a  toxic saliva into the turf that disrupts the water-conducting system, causing it to wilt and die. Their feeding pattern results in circular patches of damaged grass that turn yellow and then brown as it dies. This is what homeowners mistake for fertilizer needs. However when they fertilize and pump more water on the lawn it causes new growth, tender grass blades that the chinch bugs love and the wet grass  mixed with nitrogen  from the fertilize produces a Fungus on humid nights that causes more problems. Again, another chapter will be Fertilization. So as the grass dies, the chinch bugs work outward from the center of the infestation, destroying a larger area as they advance like an army of soldiers.

So how can we defeat this army of sod predators? First of all, break the cycle. Hit them hard while they are in the nymph stage. It will take care of the adults also. The adults are a little more “Hardened off” so to speak, but can be killed off on that initial application. Within ten to fourteen days, hit hard again. Once you break that cycle, then go on a preventative maintenance program of regular treatments every eight weeks. You will probably have some chinch bug activity, but not an infestation. Water and fertilizer is not the answer. Get to the source of the problem. Cut ‘em off at the pass. Destroy the army, don’t feed the army.


Warning: Division by zero in /home/customer/www/floridalandscapedoctor.com/public_html/wp-content/themes/landscaping/inc/template-tags.php on line 450

Keith Valentine is President of Florida Landscape Doctor. Graduating from College in 1979, he started his landscape business in Clearwater Florida in 1980. Completing small residential landscape jobs to very large commercial jobs. He is knowledgeable in all phases of Landscape Construction. His very first large landscape job was the Costco wholesale store in Orlando at the corner of Orange Blossom Trail and Water bridge. With satisfied customers all over the State of Florida his knowledge of the Landscape industry has made him well known.