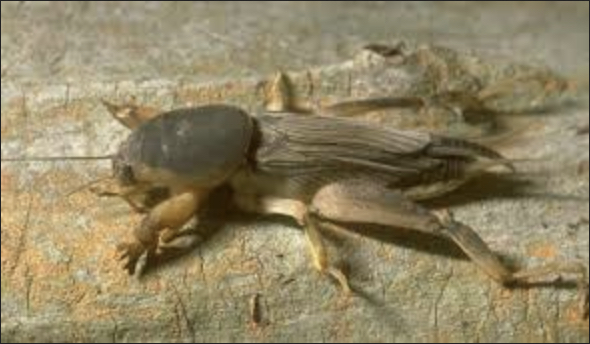 The challenges from insect problems are enough to keep us busy year-round.

One of the costly challenges is the mole cricket. It has received the most attention because of its damaging presence on golf courses as well as residential turf throughout the Southeast. The amount of damage caused and the money spent on control is counted in the hundreds of millions of dollars.

Mole Crickets overwinter as large nymphs and adults. By late winter or early spring, those crickets are adults. In some years, spring damage from adults can be severe, and spot treatments are necessary to keep damage to a minimum. If you’re going to treat in late winter or early spring and since you will be treating adults, it is better to use a bait rather than a residual spray due to the sprays not being very effective against the adult mole cricket. However, in the areas where a lot of spring damage is occurring, some control is better than none.

Adults lay their eggs in the spring and they only have one generation per year, so all the eggs are laid in the spring. The life cycles of the mole crickets in Florida are as follows. They lay their eggs in April-May, and nymphs occur through August or September. In southern Florida, however, the short winged mole cricket can lay eggs all year round. If the number of adults laying eggs could be reduced in the spring, then the problems in the summer and fall would be less. Mole crickets seem to prefer bermudagrass and bahiagrass, but also attack St. Augustinegrass and other warm season grasses as well as vegetables.

An important factor in mole cricket management is mapping. Some turf areas have heavy infestations, and very few properties have mole crickets everywhere. So mapping is a way to treat just the areas with the problems. Mapping saves time and money. Treat mole crickets when they are small nymphs, right after the egg hatch. In late June and early July, warm season grasses look good and there are no indications of mole cricket problems. A good map of problems from last year will allow you to concentrate on the problem spots. Scouting is important to determine when egg hatch is occurring. In many areas of the south, egg hatch occurs in late May, June and early July.

The most effective control will be an insecticide application right after eggs have hatched. This assures that nymphs already feeding will be controlled while small and before they do any damage. Weather can delay egg hatch sometimes up to two or three weeks. The soil temperature makes a difference. Timing is very important in controlling mole crickets. So hit them while they are in the nymph stages.


Warning: Division by zero in /home/customer/www/floridalandscapedoctor.com/public_html/wp-content/themes/landscaping/inc/template-tags.php on line 450

Keith Valentine is President of Florida Landscape Doctor. Graduating from College in 1979, he started his landscape business in Clearwater Florida in 1980. Completing small residential landscape jobs to very large commercial jobs. He is knowledgeable in all phases of Landscape Construction. His very first large landscape job was the Costco wholesale store in Orlando at the corner of Orange Blossom Trail and Water bridge. With satisfied customers all over the State of Florida his knowledge of the Landscape industry has made him well known.